I decided it would be a good idea for our lab, and for me, to have a 3D printer at our hands. After some consideration, I ordered a kit from a local supplier DIY Electronics whom I would gladly recommend. The kit, a relatively new design, is named a Prusa i3. Up to now, after the printer has been assembled and improved. I have yet to decide on a proper name.

Below is a very crude time lapse I made using my GoPro 3, suction-cupped against the wall.

After installing the Repetier host and firmware and getting the end stops and motors working in the correct directions I was able to successfully print a cube. Which I thought was way too easy. After some numerous calibration guides and models from Thingiverse I have calibrated my machine enough to print its own parts. The list of which I will share at the end of this post. He was originally just white, but now has a few black parts which were all self-printed with PLA. 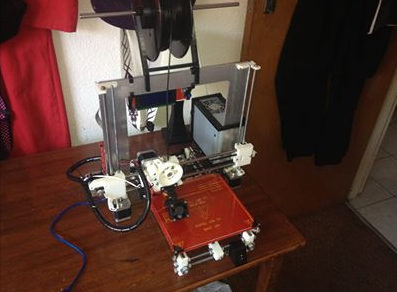