After a number of flights in stabilize mode with a very stable vehicle, it was decided to test the rest of the flight modes. Our goal was to build this into a measurement platform which necessitates the use of the auto modes. Therefore, we went to an open test field near Stellenbosch where we switched the quadcopter to loiter mode. The latter action caused the quadcopter to ascend at full throttle with no sign of stopping. After landing and trying again the same thing happened.

After this slightly unsuccessful test, I learned that in the newer APM firmware versions vibration can be an issue and can cause the observed behaviour. I decided to start eliminating all the vibration I could find. Starting with the motors I measured the vibration with an app called “vibration on my iPhone”. Spinning each motor independently while strapping the phone onto the motor arm I could monitor the intensity of the vibration and start balancing the motors in the same manner as the video I found below.

After some experimentation, I realized that the motors without any nut and spinner were perfectly balanced, however, as soon as the spinners are added it would put the motor extremely off balance. As a result, I balanced each spinner with a piece of tape, much like they balanced the motors in the video. This meant I now had 4 non- vibrating motors. At this stage, I did not have a prop balancer and had to hope my cheap colourful gem-fan propellers were reasonably balanced.

To actually test if there were any relative improvement I enabled the IMU data logging onboard the APM. I downloaded the log after each change to relatively measure what performance difference the modification had.

It can be seen in the comparison that there was initially also some experimentation with different APM mountings such as being screwed down, double-sided tape, moon gel pads and lastly, the configuration that is still being used, dampening pads below the entire electronics platform. Remember that these modifications were done before balancing the spinners, note that it almost seems as if the vibration got worse with the different platforms except the moon gel. It should also be stated that with the new dampening pads the whole layout of the vehicle was changed. A motor which was slightly damaged in the previous crash was also replaced with more negative results. However, balancing the prop spinners and propellers showed a slight decrease in vibrations as seen in the graph below. Something weird was noticed when balancing the gemfan propellers, it seemed that they would be heavier on one side of the hub. It was here that I decided to invest in more expensive APC propellers which as you can see made a huge difference and finally enabled loiter and the auto modes to work flawlessly.

After a long break moving to another city, I restarted my efforts on the quadcopter build. This time adding the motors and finalising the construction to the point of a maiden flight. Some changes to the previous thought process were incorporated: channelling the high current ESC wires through the aluminium tubes. The latter meant disassembling the whole quadcopter.

The motors are 800kV tiger motors which will each, in turn, need to drive a 10×4.5inch prop. The motors can be seen mounted on the edges of the quadcopter with their cabling running through the aluminium tube into the centre plate cavity. Next, the power distribution board was fastened on top of the centre plate with the help of plastic screws. This allowed the ESC’s to be installed connecting all four motors allowing some initial testing. To test the motors, the battery and PWM lines were connected to the distribution board and receiver module respectively. After confirming all four motors are spinning their directions could be set as illustrated in the APM wiki. The connections for the power distribution board can be seen below. The ESC PWM wires will need to be shortened, in the current configuration they will cause horrific RF pickup loops. 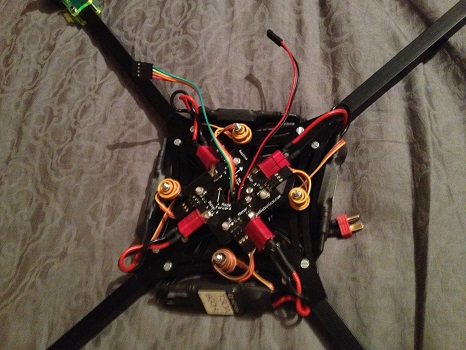 With power and PWM connections to the motors now established the remaining electronics can be added to the build. The APM, telemetry radio and receiver are all now mounted on a platform and connected. This platform is part of the frame and will fit right above the distribution board. The electronics platform can be seen below. 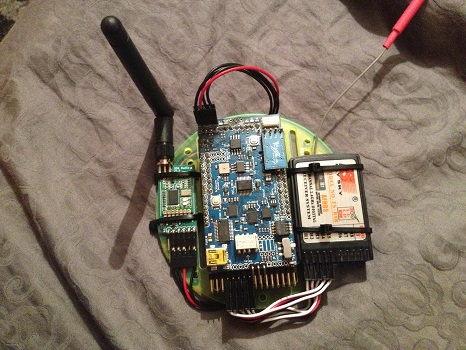 After the electronics platform has been fitted, the shell containing the GPS and the landing gear was attached. Before mounting the props the ESC’s needed to be calibrated, which on stock settings were remarkably different from one another. Due to some physical restrictions, the quad is currently configured in a plus orientation which might be changed in the future. The quadcopter with its props can be seen below next to its 9x FrSky remote. 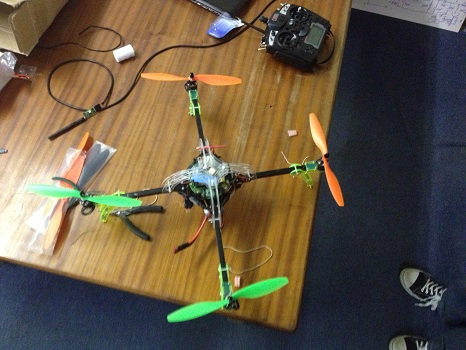